September 24, 2014
MYSTERIOUS PLACES - We could be missing the point about the Kailasa temple. This famous underground creationS, one of the Ellora caves in Maharashtra, India, fascinates many people. Everyone is marveling at the construction. Researchers, including ancient alien theorists, try to find out how the Kailasa temple was built, what an effort it must have been to cut it out of the rocks. But what does the Kailasa temple represent, what does it actually tell us? 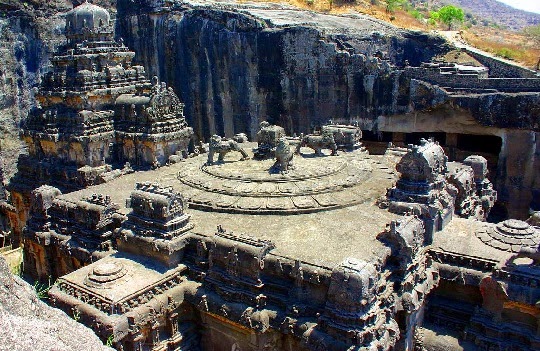 The Kailasa temple is a Hindu temple. It symbolizes Mount Kailash as the home of Lord Shiva. It is very much an elephant place: there are statues and reliefs of elephants in and around the location. An image of the sacred bull Nandi is on the central temple. Like other Hindu temples, the Kailasa temple has a Sikhara (spire), but it looks relatively small compared to the whole structure. On the inside of the temple, there is a ring or flower relief on the ceiling of the central room. The Kailasa Temple is part of the Ellora cave group. it is number 16 of a total of 34 caves. The Ellora caves are not natural caves, but religious dwellings excavated out of the face of a cliff. These caves are generally thought to have been created between the fifth and tenth centuries AD. But were they really? Is it possible that the first work was done much earlier in time? So many of these structures worldwide have been re-worked throughout history. Just compare the discussions about the sphinx in Egypt. Its pharaoh head seems too small for its body. Some people think that the sphinx was built long before the pharaohs lived and that the head was just re-carved later. The Ellora caves house Hindu, Buddhist as well as Jain temples. According to Hinduism, Buddhism and Jainism, it is one of the possible locations of Mt Meru or Sumeru, which is the center of the universe. Jainism is by far the oldest religion in the region. Jains were the first to build temples as symbolic representations of the mountain. Couldn't Jains, or even people before them, have carved the basic Ellora caves, in times immemorial? Otherwise the site was some just some sort of market place, where each religious group or ruler carved out booths for themselves when they needed them. This just sounds too random. The thought that there was a larger, older plan to the Ellora complex is supported by the numbering of the caves. Why are they numbered in the first place? And why is the numbering not chronological? Maybe the cave complex as a whole represents something. If Kailash temple symbolizes the center of the universe, then what is around it? The solar system, the galaxy, the cosmos? What if we theorize that the Ellora cave group is thousands of years older than expected? It would be interesting to research the complex from this point of view, to see what its secret story is.

ČanUpròóvUrnotabot?
Posted by Astro Nutter at 07:05