Extraterrestrial advisors of ancient Sumerians
OK! About 7 millennial ago, mankind went from hunter-gathers to farmers & then civilisation. It didn't Take long until giant cities were built & huge buildings with water piped thru them existed. Beasts in the field & forest, became sophisticated. They held rank & privilege. Astronomy was the number 1 science, studied by the Elite. Something does not add up! Similarly is that 100 years ago-ish, we couldn't fly. Now? In the 1940's we discovered the power of the atom. We went from valve technology to transistor. How!
People have seen things in the sky since time immemorial. We must look into the past, to understand our future. Keep'emPeeled.
https://ancientvisitors.blogspot.com/2012/06/extraterrestrial-advisors-of-ancient.html

June 08, 2012
ANCIENT ALIENS - For millions of years, man lived a primitive life as hunter-gatherer. Then, some 7,000 years ago, civilization appeared. This seems quite sudden and even unlikely. Did man have help? Were there coaches, advisors on Earth at that time?

Ancient Sumerian sources can be interpreted in this way. The Sumerians, the most ancient known civilization that appeared from the fourth millennium BC, said that the 'me', the laws of life and the universe, were handed to man by the gods. But how did this take place? Were these laws just dropped down from a spaceship? It seems more likely that man was gradually introduced to new ideas and techniques and coached along the way. There are some clues in Sumerian texts about this as well. The Sumerians speak of 'abgal', which literally means 'great elder' and is translated as wizard, wise man or sage.  The term is used almost casually in administrative documents, as a type of person like a 'woman' or 'baker' or any other ordinary phenomenon. The Abgal had helpers like 'water-carriers', and had special privileges in society. In the earliest Sumerian period, the Abgal were advisors to the legendary kings. Later, the term disappears from everyday Sumerian life. In Sumerian mythology, 'abgal' is associated with Enki, the god of water, creation and intelligence. It is also connected with Abzu, the source of all fresh water on Earth. Abzu are said to have been seven half-gods or wise men sent by Enki. Similar creatures are depicted by the later Akkadians, who called them Apkallu. There are parallels with other ancient legends as well, see for example the Nomos of the African Dogon tribe. Abgal or similar beings are usually depicted as half human – half fish. Their faces seem serious and goal-oriented. In ancient legends they come on a mission, to build or solve something. 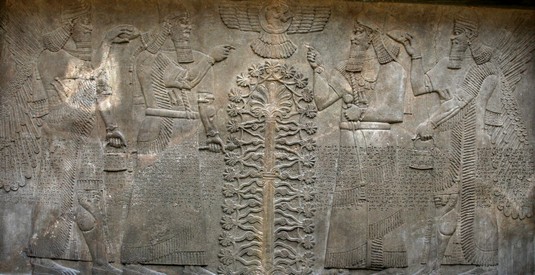 Now could all this prove that man had extra-terrestrial help in building the first civilizations? The Sumerians seemed to have experienced this. These beings brought godly knowledge to primitive humans. They advised and trained them for a period of time. From myths and legends it seems that they also interbred with human. This may well be a primitive idea for something that was not understood at the time. Why the water and fish cult? Water is the source of life. The freshwater spring was guarded in the temples. Maybe there was actually some DNA-engineering going on, that only the priests as Abgal-helpers knew about? There could have been something in that water as well…

ČanUpròóvUrnotabot?
Posted by Astro Nutter at 07:49