4 Of The Best Gunslingers Of All Time!

What starts in laughter ends with tears

Loc: Sherrifs HQ, a prisoner is  in a cell. It's Billy the Kid.

Wyatt E: How many men have U killed Billy?!

BtheK: They stood in my way.,

BtheK: No Sheriff, no chance! I like U. So I ain't gonna kill U.! I just wanted the money! The Gold! They should have handed it over!

WE: You're under arrest for grand larceny, theft & whatever I can get U for!

WE: sorry Billy, we gots ya & we have ta go by the books.

4 hours later Billy fled said cell & could've killed Sheriff  Wyatt Earp, but left him alive. He wouldn't  kill a man in cold blood but was later killed by the sometime, often cursed Pat Garret. He used his friendship to get close & gunned Billy down for the Silver dollars he received that he said he lost,  playing poker Texas style on his way on a ship to Europe with a beautiful lady of the stage. 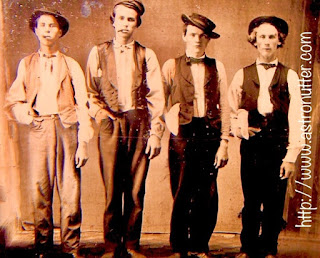 Above: this is the line up of the top gunslingers of all time! (taken @DodgeCity  in 1886) They're all there! Billy the Kid- Jesse James-Bat Masterson-Wyatt Earp.

The history books say it's true, but U try looking into it the past.?Keep'emPeeled @ http://www.astronutter.com

Sent from my MInd
Posted by Astro Nutter at 08:28