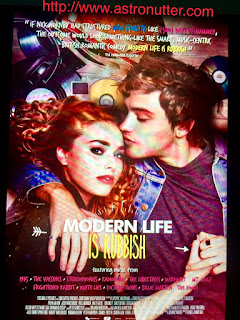 I watched said movie on my TV box. 2B fair it was beautifully shot, the actors & actresses were excellent, the talent was there butt the scriptwriter/s should be x%#! @Thank fukk I didn't have to pay let alone go to a cinema & pay for a lady+snacks&drinks&taxi! Ok, here is my take on this film:

The theme was: Forget being creative. Get a dead end job. U may get internet fame (it's been quoted by every moron on the planet that U don't make money from the internet. Don't believe it. It could open the doors to untold riches, I digress) for being a complete cissy. Get someone who loves U in debt by buying U an iPhone 4 Xmas-an American invention based on a Roman Emperor Constantine (he borrowed it from us Celts ) emperor's delusion. Back to the films theme- Worship some forgettable girl (she's young, so pretty, take a look at her in a twenty years time guys) because she pays the rent. B BRILLIANT!!! but get a dead end job where U  have to be nice to people who have money only so U can get the girl back. Oh & the showtime stopper! Say sorry a million times to a forgettable girl & say she was right all along & U r a kunt! A film to destroy a million dreams a fortnight. My advice? It's a gender thing so:

Guys, U tread the dragons path many r the pitfalls & dangers. Even best friends will con U. A femme U held true will stab U in the back-symbolically yet really. But U lot r at the beginning, aren't U? 2BcuntInUd? Keep'emPeeled @ http://www.astronutter.com