Ancient History: The Pyramids: nobody knows when or who built them. Back in 18-oatcake… 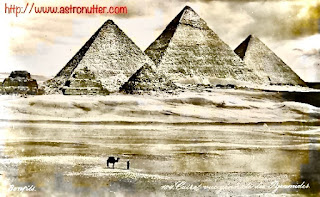 The Pyramids: nobody knows when or who built them. Back in 18-oatcake, an archaeologist, a certain Lord Fontelroy (sic) decided after years of fantastic research, was without an answer. He could find no clue as to who built the Gr8 Pyramid. He then, made an error of judgment. He took a chisel & defiled the so called "tomb" in The Gr8 Pyramid, by inscribing a fake cartouche. On it said- 'KuFu' -a Pharaoh from the middle dynasty, a pack of lies made by Lord British Empire. & the lies were even on a bath that was mistaken for a tomb. Said tomb was wasn't. You see it was a bath that the high born could use. The Priests controlled it's operations. 1st they fired musical frequencies of 440 at it -A perfect A in today's western music . This tone would be joined by other Pythagorean scales. They hoped to live longer by this effect. Fruit would stay fresh. Swords would Sharpen! It was from The Gods!
The inscription by the Lord was a lie! It was a lie. No one knows how old the Egyptian pyramids are?
Posted by Astro Nutter at 19:02